“On appearance alone, the m 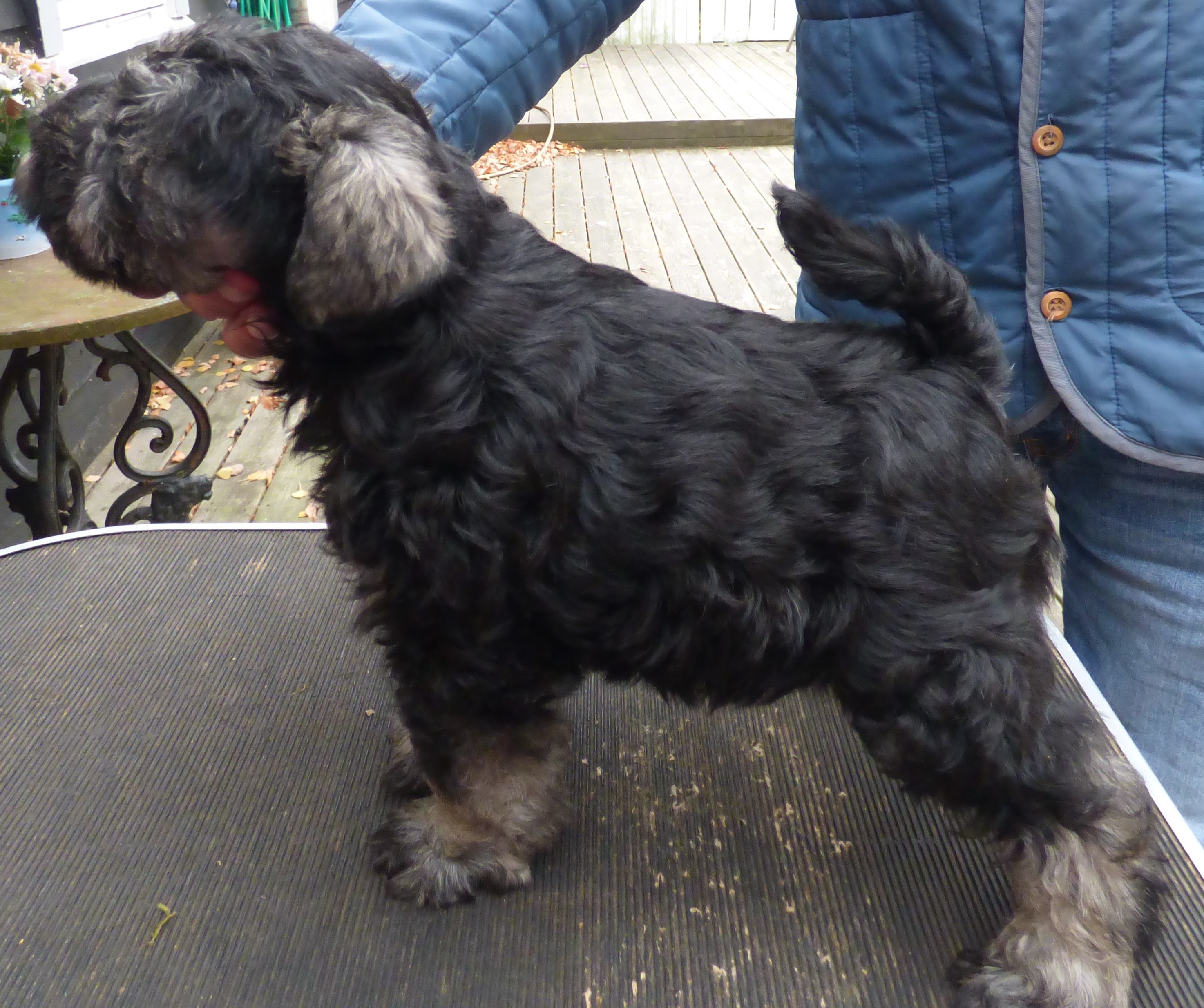 iniature schnauzer deserves the popularity that he enjoys. It is however his lively inquisitive character which launched him into the top 10 ranking among all breeds in recent years. The miniature schnauzer is big enough to really be a dog, and small enough to share your comfortable chair. Most people will select this breed for its total livability. A good Miniature is by nature alert, friendly, intelligent, vigorous, and long-lived.

Miniatures have the same spirit and showmanship of most terriers, but are much more responsive to the owner’s wishes and are noted for great intelligence. They do demand human companionship, and in return show great devotion. Miniature Shnauzers have great stamina and, in fact, will show no signs of illness until they are quite sick, and then they are fighters and will not give up.

The Schnauzer’s intelligence expresses itself in many ways. One look into his face is to sense his overactive mind and fun loving personality. The learning capacity of the Miniature Schnauzer is proverbial, and limited only by the patience of the teacher.

The breed’s performance on all levels of obedience is exceptional, and ranks among the highest in numbers of dogs that achieve obedience titles. Schnauzers learn quickly as a rule, and in time can be taught almost anything a dog is capable of learning. The only requirements are firmness, repetition, patience, and above all kindness.

Although Miniature Schnauzers are quick to adapt they love a routine. The typical companion takes pride in knowing, practically before you do what your next move will be. They have good memories and will recognize friends or former owners after a long period. As he is not a jealous dog, he will gladly share his people with others, both human an canine, and even give space to the family cat. Although not know essentially as a one man dog, his full devotion is usually for one person, after which he includes the immediate family in various gradations of affectionate regard. Schnauzers seem to understand children and are infinitely gentle with them, and will delight them for hours with their clever antics without becoming impatient or intolerant. Children who are taught to handle them properly will particularly enjoy their whimsical character.

Miniature Schnauzers are not by nature aggressive, as are some of their terrier cousins. They should however be relatively fearless. Once mature, the Schnauzer has a strongly developed territorial instinct. He is an ideal guard dog as he defends vocally rather than physically. There is a meaningful difference between being quick to defend and quick to attack. A good Schnauzer will bark at anyone who may appear a threat to his home. He barks till the caller leaves if you are not at home or until you arrive on the scene. Once you are there, he accepts that you are in control of the situation and is silent. For all his boldness, the miniature Schnauzer will display a natural kindness and charm for those who show themselves as friends.

Schnauzers are not random incessant barkers. They are discriminating and intelligent guard dogs that assume this duty naturally. Too intelligent to be argumentative, they are positive thinkers, know their territorial rights and defend them. Basically, the Schnauzer’s disposition is sweet, loving and loyal, but he is not all subservient or overly sensitive. People who want a lie - at - your -feet type dog, or one that is aloof, would not enjoy a Miniature Shnauzer. Wanting you affection, he may climb into the middle of your newspaper or put his head under your arm with a prodding motion. It would never occur to him that you might be too occupied to pet him. A great sense of self is one of his most endearing qualities. Schnauzers enjoy the outdoors in all kinds of weather. This need to be a part of their local surrounding should be satisfied. They enjoy long walks, and in pairs will run lively races with each other. Usually they like to swim too. On the other hand, they are an excellent breed for the city dweller. The schnauzer kept[ mostly indoors would be happiest when provided with a window or door form which to view the outside world.

Whether a dog (male) or a bitch (female), the miniature schnauzer rates high as a totally reliable companion. Individual disposition is far more important than sex in a pet. Both males and females being equally loveable.”

The above text was taken from the book The New Miniature Schnauzer by Dan Kiedrowski, Howell Book House, New York, 1986